Home Relatable The Easiest Way To Manipulate People Into Doing What You Want –...

Mindlessness. The state that we go on autopilot mode. The state that we act or react to different situations according to the embedded ‘scripts’ within us. And we scratch our heads subsequently, feeling puzzled and pondering about our strange actions. Well, we have all experienced these scripts before one way or another. Take the example, you are driving to your friend’s place when you realized that you took a wrong route – a route that you take to work daily. Or you wake up one morning and started preparing for work only to realize that it is a public holiday.

Ellen Langer is a social psychologist and a Harvard professor who is renowned for her take on mindfulness and mindlessness. She conducted an experiment in the early ’70s, along with her research team, to ascertain if our behaviors are actually realized without paying attention to the informative environment around us – also known as mindless behavior.

In the Xerox experiment, the researchers approached people who were using photocopiers and asked if they could cut the queue. They would ask them one of the three questions.

The study concluded that subjects were more likely to accede to the request when given a reason, but were equally agreeable even when the reason was bogus or senseless. You would have notice that the reason in question 3 makes no sense – obviously, everyone in the queue needed to make copies. But the magical word “Because” was powerful enough to trigger a mindless response that justified the request. 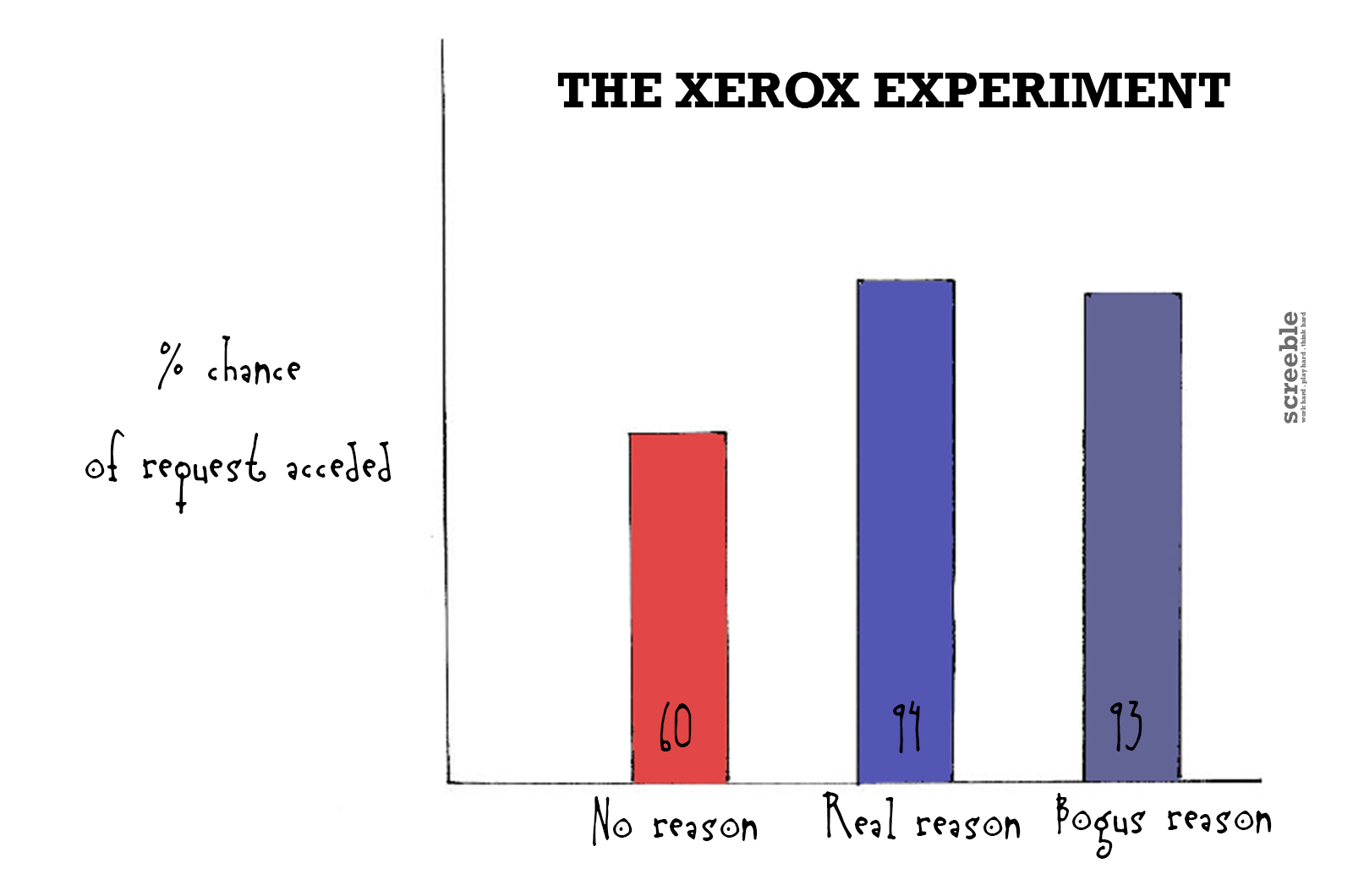 “Because” is the conjunction that connects your rationale to the giver’s stimulus. It is a bridge for persuasion. “Because you’re worth it!” This powerful and positive pitch doesn’t mean Loreal‘s products are worth it. It’s about their reason, their justification that resonates with women so they become customers.

It doesn’t necessarily mean that you need to go heavy on the word. The crux is about your intention, your reason, your goal. Take a look at the description of Book Depository. “Book Depository is the world’s most international online bookstore offering over 17 million books with free delivery worldwide.” While there is no explicit “because”, the reason is clearly conveyed – “Please buy from us because we offer free delivery“.

Mindlessness causes people to assign justified reasons for their actions based on habits and haste. So the next time you ask people to do something, try giving a reason. Because it will turn out a cut above.