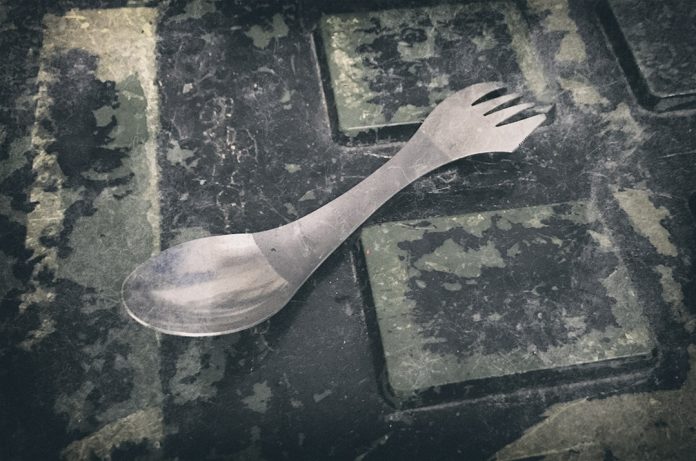 Three years ago, I bought a titanium spork. No. Actually, I bought two. Because Mom doesn’t understand what’s privacy and opened my parcel. She fell in love with it. Then she kidnapped it and told me to get my own.

No buts. Go get your own.

The conversation ended with a door slammed in my face. And I had to order another.

Anyway, I will touch on how the titanium spork better my life later. But first, my reason for buying it was because I broke my used-to-have plastic spork. Busted on a ridiculously marbled piece of chuck. Hey, I’m a great cook. But the meat sucked. So I figured if I were to make any inroads with my meat in the future, I needed some heavy metal reinforcement.

Thus began my search for a new spork.

In the animal kingdom, honey badger takes the throne as the ultimate badass. The question is what is the crème de la crème in the world of metals. It has to be adamantium right? Yes, that indestructible material bonded to Wolverine’s claws and bones.

Turned out they don’t sell adamantium sporks in this planet. And the fact that adamantium isn’t a real thing. Closest I found are the titanium sporks. But you know what? I will take it. Titanium is good too. One of the toughest alloys around. Lightweight and extremely strong. And a titanium spork will last forever.

Boiled down to two choices.

I eventually ended up with the Light My Fire and Snow Peak titanium sporks as my top two contenders.

The Light My Fire Titanium Spork has a two-sided combo — a spoon and fork on each end. It has a neat but almost useless knife edge built into one of the fork tines. Which isn’t sharp enough to even slice butter. So it won’t cut you, or anything else.

The Snow Peak Titanium Spork has a scoop with tines on the same end. It’s cheaper compared to the former. But I find the scoop too shallow to truly hold soup. And the tines too short to twirl noodles.

That means, for pure functionality wise, the LMF takes the cake — and my money.

It made my life awesome.

Now I dine with style. When people see me using a titanium spork, they know I am a big deal. I have taken it to the Te Araroa Trail in New Zealand, to the Grand Canyon, and to all my backpacking trips. Sturdy, ultralight, and cleans up super easy — which is awesome when out in the backcountry.

I used to suffer from migraines and tension in my neck and shoulders a lot. Now I don’t. I simply place my titanium spork on my upper back while lying face flat. Just so you know: Titanium promotes wellness by balancing the body’s electromagnetic energy.

Be careful, though. Once I fell asleep and woke up screaming like a goat with half the spork driven into my testicles. I don’t know how it got there. Fortunately, it turned out to be only a dream and I found the spork tucked under my butt. Safety first, my dear friend. Having a spork stuck into your hairy bits is definitely not every man’s idea of a good day.

It’s not like some kind of miracle drug, so don’t expect to get mind-blown. And different things work differently for different people. It could have been a placebo effect, but I’m honestly happier as a result of this spork, so I recommend it.

And if you are fat like my boss, you might need a few more pieces to get the same effect.