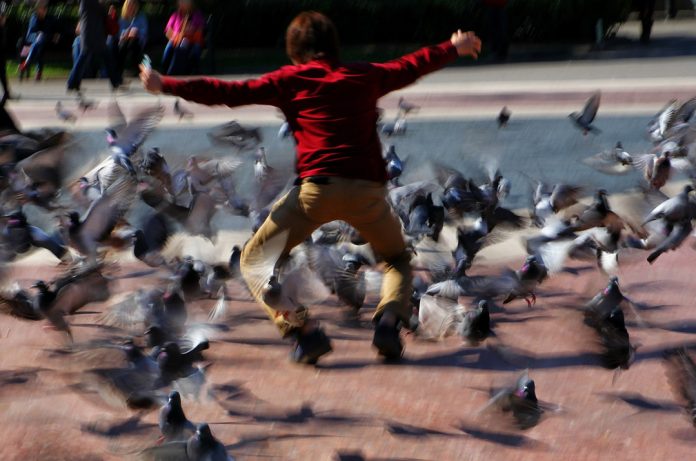 The pigeons. They really don’t do much more than getting in your way, glaring at you for no fucking reason, and then raining shit all over you. Back seat drivers are the pidgeys of the human world. While they think they are helping the situation by interfering officiously and dispensing unsolicited opinions on how to run your life — in all actuality, they are just casual observers making ill-judged assumptions and coming to erroneous conclusions based on incomplete information.

Now shake that up with a back stabbing serum and voila, your crappy personality cocktail is ready to be served: The Backstabbing Meddler.

You know who I’m talking about.

Backstabbing Meddlers seem to be your friends. They can be nice to you, then turn around and bury you with backhanded insults and vicious rumors; with no qualms about turning everyone against you or turning you against others. The ongoing conversations with them mostly consist of saying negative things about others to you and vice versa. To be fair, most of them are clueless about how disruptive they can be because they think they are doing the right thing. Then again, some do. They are hard to identify, it’s usually too late.

They never get it.

Most commonly, these meddlers don’t have the relevant expertise or experience, but they believe that they are capable enough to influence any situation for the better. They don’t seek to understand; they think they understand; and they leap to conclusions, misjudging the true probabilities of events.

They do things in the name of Good.

That idea, though simple, has the power to do real harm. It is difficult to make certain decisions in good faith when you don’t know all of the facts, let alone run someone else’s life. What the meddlers are conditioned to think or feel a certain way, perceive as good or better, may actually turn out to be the polar opposite. And getting it wrong can cause substantial damages — misunderstanding and frustration, subpar solutions and frayed relationships.

They do not need to pay for in the end.

They can run the gamut however they want to. They can do awesome stuff and they can do shitty stuff; they can hurt more than help. But consider this for a moment: Would you care when you have no business with the consequences? Probably not.

To add into the bargain, probably due to their two-faced nature, some of them are also naturals in brown nosing. They behave in a friendly and obsequious manner, fawning over people in the position of authority, thereby currying their favor. They do this often enough, for they are pleased with themselves and want to please others. And they habitually make facetious remarks, treating serious issues with deliberately inappropriate humor. “Mood lighteners”, they call it.

So what do you do?

God must love assholes. He made so many of them. Since you already know the world has plenty, there is no reason to be surprised, angry or upset when you cross paths with one. There will always be these clueless, crappy scrubs that are doing little more than getting your goat and fueling your desire to kick the shit out of them. But you don’t have to. Because they simply aren’t worth any of your efforts or time.

Remember this: Never wrestle with a pig. You get dirty and the pig gets happy.

One doesn’t have to deal with them one way or another unless one wants to. They will eventually cross another one of their kind and serve their shenanigans to each other.