Home Musings The True Tale of the William Brown Shipwreck 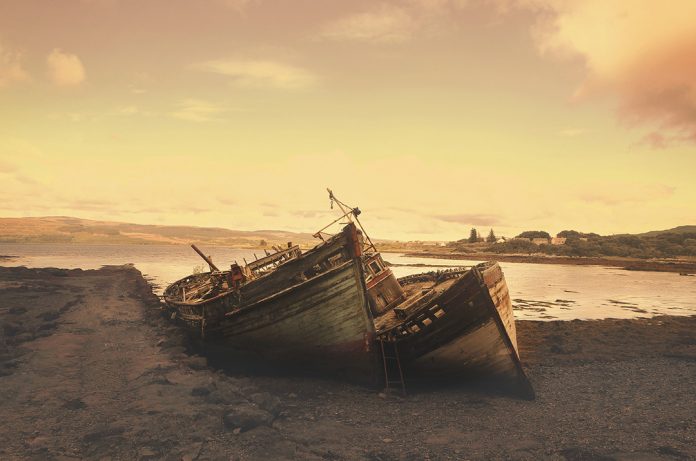 March 13, 1841. The William Brown set sail from Liverpool, bound for Philadelphia. Five weeks into the voyage, on the night of April 19, the vessel struck an iceberg 250 miles southeast of the coast of Cape Race, Newfoundland, and began to sink rapidly. The captain, second mate, 7 sailors and one fortunate passenger appropriated for themselves the better of the only two lifeboats—a jolly boat, that had a sail and a fairly deep draft. The other craft, a longboat, which is built to hold just seven and could only be propelled by oars, was left for the first mate and remaining over thirty passengers and crew.

With a storm looming and icy Atlantic rain already beginning to fall, it soon became apparent, to First Mate Francis Rhodes, that the longboat would have to be lightened was anyone to survive. The same thought had occurred to the captain, George L. Harris, who had taken to the accompanying jolly boat. But he prayed for deliverance from another, more palatable source.

“I know what you will have to do,” he confided to Rhodes. “Don’t speak of that now. Let it be the last resort.” The following morning he sailed for Nova Scotia, leaving the hapless, foundering longboat to its fate.

On the day of the twentieth, and on into the night, conditions worsened and the waves began to build. The boat sprang a leak and, despite frantic bailing, began to take on water. The situation was forlorn. And so at ten o’clock, on the night of April 20, a momentous decision was taken: some individuals would have to be put to the sword. Such an action, reasoned Rhodes, would not be unjust to those who went over the side, for they would surely have perished anyway. But if on the other hand, he condescended to take no action, he would be responsible for the deaths of those whom he could have saved.

Unsurprisingly, not all of the assembly concurred with Rhodes’ reasonings. The dissenters contended that if no action was taken and everyone drowned as a result, then no one would be responsible for the deaths. In contrast, they argued, if he endeavored to save some of the parties at the expense of even one other, he could only do so through the active taking of life and would end his days, and quite possibly everyone else’s, as a murderer. That, by far, would constitute the greater evil.

Unmoved by the charge, Rhodes stuck to his guns. Since their only hope of survival depended upon staying afloat, not to mention, in addition, a Herculean feat of oarsmanship, the situation as it stood was untenable, he countered. Something, or someone, had to give. “Help me, God! Men, go to work!” Rhodes cried out to the deckhands as he and fellow crew member Alexander Holmes set about the grisly task of casting people off into the tumultuous, inky cauldron of the North Atlantic. At first, the other seamen did nothing, prompting the second exhortation from Rhodes: “Men! You must go to work or we shall all perish!”

The death toll started to rise. All fourteen of the male passengers were sacrificed, including two that were found to be hiding. Those who remained were just two married men and a boy, plus all but two of the women—the sisters of a man who’d previously gone over the side, and who chose, voluntarily, to join him.

Eventually, salvation beckoned and the survivors were rescued by a trawler bound for Le Havre. And when at last, they arrived in Philadelphia, they filed a lawsuit with the district attorney. On April 13, 1842, almost a year to the day since he’d cheated the icy Atlantic, able seaman Alexander Holmes stood trial on a charge of murder. He was the only crew member they could find in Philadelphia—and was the only one to ever be indicted for his actions.